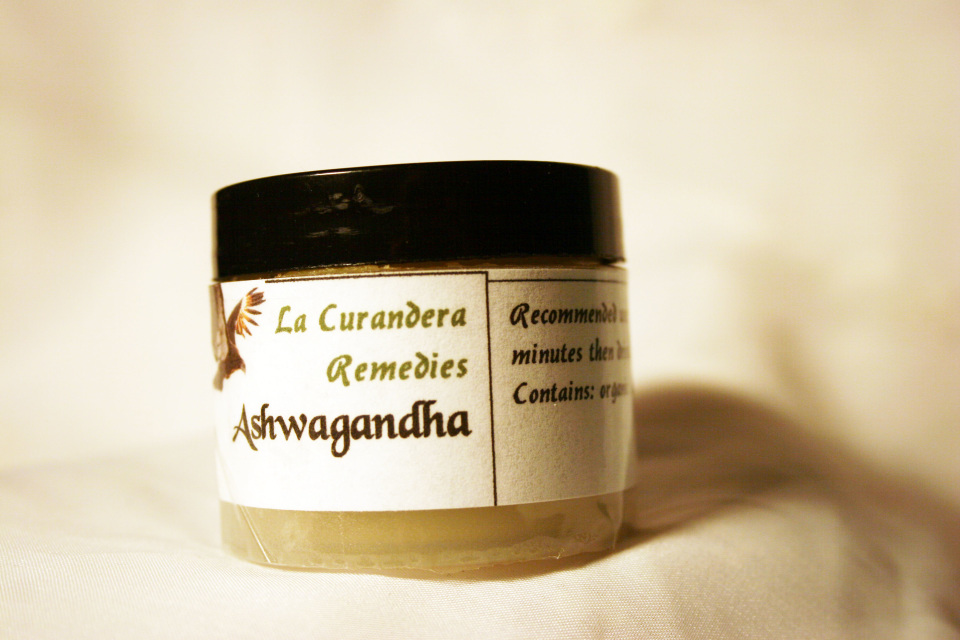 SKU:
$19.00
$19.00
Unavailable
per item
Please DO NOT order this if you are not in the continental US, unless you contact us FIRST at info@curanderahealing.com, for shipping fees. Otherwise you will be charged for the paypal fee for refunding your money.


Ashwagandha has become one of the most popular Ayurvedic herbs in use in the Western world. And it is no wonder, with all the benefits that Ashwagandha has to offer! Ashwagandha has been used by Ayurveda for thousands of years as a rejuvenative and an adaptogenic herb, meaning that it is used to help the body resist physiological and psychological stress. It is recommeded for Vata aggravation and for people whose prakriti or constitution is Vata. You can find your constitution by clicking on the first box on this Market page. Not recommended for Pitta and Kapha people.
Please see previous product listing for $10 two ounces of powder
Please see previous product listing for $13 for 48 capsules
$18 four ounces of powder


This ground root comes in the form of a "churna" or powder, which is the traditional Ayurvedic method of ingesting it. Put 1/2 tsp. in warm water, let sit for at least ten minutes, then drink.


Two-ounce container of the ground root. Often used for people who are undergoing chemotherapy. According to Ayurvedic theory Ashwagandha  builds ojas. A thirty day series of enzymatic processes transform lymph fluid into ojas, which is the body's most specialized tissue. Ojas controls reproduction, immunity and general health.


Ojas depletion can be caused by stress, which triggers stress fighting hormones and free radicals that in turn cause degeneration of the immune and other physiological systems. This stress-induced reaction can open the way for illness and disease.


Ojas is the most subtle, refined level of the physical body and is the end result of healthy food which is properly digested. It is responsible for a healthy immune system, physical strength, lustrous complexion, clarity of mind and sense of well being. It allows consciousness to flow within the body. With decreased ojas, we are less in touch with ourselves and more prone to diseases and having a feeling of disharmony.


Ashwagandha is also used to prevent stress related gastrointestinal ulcers. It increases physical endurance, calcium level and libido and sexual function. It prevents the depletion of vitamin C and cortisol thereby slowing down graying of hair.


In Ayurvedic theory Ashwagandha balances both nervous system and musculoskeletal system. Therefore, it is helpful with fatigue and nervous exhaustion and increases digestive heat in chronic conditions. In arthritis, which involves joints that are painful, dry, swollen and inflamed, Ashwagandha would be the herb of choice.


Ashwagandha is effective for insomnia but does not act as a sedative. It can be helpful for pitta and vata individuals but not for kapha as it can cause weight gain.


The Department of Nuclear Medicine, Radiotherapy & Oncology, School of Medical Sciences in Malaysia has concluded that Withania somnifera has potential against cancer-related fatigue, in addition to improving the quality of life.


Natural Anabolic Training Aid: Another area where Ashwagandha is becoming popular is in sports and athletics. Endurance athletes who train heavily, such as long-distance runner and cyclists, are very prone to infections. Excess cortisol produced in response to the heavy training load suppresses the immune system. It can also lead to muscle and tendon tears as the muscles are weakened due to protein loss under the influence of cortisol. With its muscle preserving qualities, Ashwagandha is the perfect natural anabolic training aid for the serious athlete.


Ashwagandha balances both nervous system and musculoskeletal system. Therefore, it is helpful with fatigue and nervous exhaustion and increases digestive heat in chronic conditions. In arthritis, which involves joints that are painful, dry, swollen and inflamed, Ashwagandha would be the herb of choice.


It is effective for insomnia but does not act as a sedative. It’s rejuvenative and nervine properties produce energy which in turn help the body to settle and sleep. Thus it helps the body to address a stress related condition rather than masking it with sedatives. It rejuvenates the nervous system, erases insomnia and eases stress.


Recent research on "Effect of Withania somnifera (Ashwagandha) on the development of chemotherapy-induced fatigue and quality of life in breast cancer patients." http://www.ncbi.nlm.nih.gov/pubmed/23142798
http://www.realnatural.org/over-fifty-recent-studies-prove-ashwagandhas-potential-for-treating-a-myriad-of-conditions/
A flurry of new research from around the world on Ashwagandha is proving the medicinal effects of this ancient Ayurvedic herbal remedy are more than just anecdotal.


The past year has been banner year for Ashwagandha research. Numerous studies confirmed its healing properties in a variety of conditions, including stress, toxicity, heart disease, Alzheimer’s disease, diabetes, Parkinson’s, skin cancer, tuberculosis, liver toxicity and many others. Following is a summary of some of the findings of the over fifty different human, laboratory and animal studies conducted using Ashwaghanda published during 2012 and early 2013: