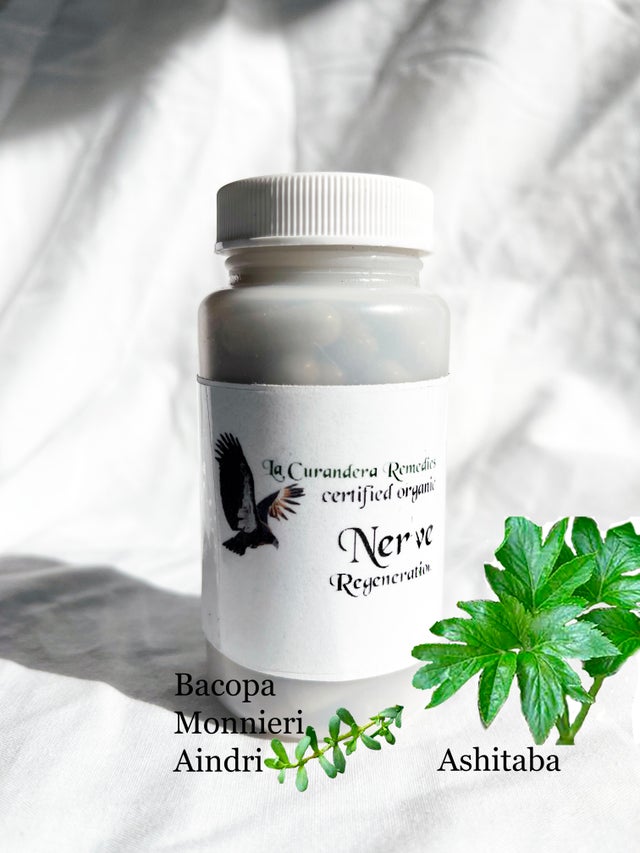 General Health Tonic  In traditional medicine, the plant is seen to be a strengthening tonic. The Izu Islands used to be a place of exile, criminals and social outcasts relegated to these desolate islands as a form of punishment. The exiles were forced to withstand poor diets and hard labor. They foraged for food gathering their sustenance from the rock and sand. Surprisingly, historic records indicate that despite harsh circumstances, the exiles were healthy and lived long lives. Tradition attributes this unlikely healthfulness to the continual consumption of Ashitaba.

Ashitaba  keiskei  is a remarkable tonic herb of the angelica family that has been used for centuries in Japan as a natural detoxifier; supporting healthy liver and kidney function. It's greatest use today is to treat neuropathy. Modern research has revealed that Ashitaba contains natural phytochemicals known as chalcones, which act as powerful antioxidants and cellular protectors.

​Chalcones have also been found to stimulate the production of Nerve Growth Factor (NGF), which is synthesized in minute amounts in the body and is essential in the development and survival of certain neurons (nerve cells) in the peripheral and central nervous system. NGF is believed to have the potential to alleviate Alzheimer's disease and peripheral neuropathy. Ashitaba has a broad range of nutrients, including 11 vitamins and 13 minerals. Nutritional analysis reveals that 100 grams of Ashitaba powder contains the beta-carotene content equivalent to four carrots, the vitamin B2 content equivalent to 28 cloves of garlic, the vitamin C content equivalent to four lemons, and nine times the amount of iron found in spinach. It also contains vitamins B1, B3, B5, B6, B12, biotin, folic acid, and the minerals calcium, magnesium, potassium, phosphorous, zinc, copper, manganese, sulphur and silicon. May not be beneficial for those with hypothyroid. Most people with normal thyroid or hyperthyroid report a tremendous feeling of well-being when taking ashitaba. It is especially helpful for diabetics with neuropathy.

Scientists at the Biomedical Group of Takara Shuze Co Ltd., have discovered an increased production of Nerve Growth Factor in ashitaba.

Active molecular structures from ashitaba that are said to help enhance NGF includes the following:

-four coumarin compounds (two novel ones and one chroman compound)

Digestive Tonic  For hundred of years it has been used to improve digestion. Ashitaba has a bitter taste and contains bitter principles. like other bitters it increases appetite, improves digestion, speeds elimination of waste and generally acts as a digestive tonic.

As a consequence of its many and varied traditional uses, the plant has been the subject of scientific research. One of the first findings was that the yellow color of the juice is due to pigments known as chalcones-compounds almost unique to Ashitaba. Chalcones are rarely found anywhere in the natural world! Research has shown that the unique healing properties of Ashitaba are at least partly due to these unique compounds.

Ashitaba is seen as a superb supplement for those who have weak digestion, or gastric or duodenal ulcers. Whether digestive inactivity or overactivity, Ashitaba can be used to regulate a badly behaving digestive tract.

When applied topically, its wound healing activity is phenomenal. It can be used in acute and chronic skin problems, from accidents to psoriasis. It should be applied regularly until the skin condition clears.

According to Ayurveda, the body is a crystallization of the mind. So just as impaired "fire" or agni and indigestion are at the root of disease, the mind also plays a critical role in our overall health.The name aindri (often pronounced "endri") comes from the name, Indra, because this plant was one of his favorites. Indra was famous for his love of soma, and aindri has a lot of soma.

Aindri is Medhya (Good for the Mind)

The special property of aindri is increasing the power of the mind. Aindri does this by enhancing the three basic components of the mind independently, and by improving their interaction with each other.

The three components of mind, according to Ayurveda, are dhi (power of learning), driti (power of retention) and smriti (power of recall). Modern research also describes these three factors to be the most fundamental aspects of mental function, and interestingly, modern studies on aindrii show improvements to each of these areas when this herb is ingested.

Modern Approaches Can Be Shortsighted

Unfortunately, modern science always wants to isolate an active ingredient, and it has found one in bacopa, and has named it bacopacide. Ayurveda does not agree with this approach. When one chemical is isolated from a plant, it loses the balancing factors that exist in the remainder of the plant chemistry.

Ayurveda prefers not to use any strong compound in isolation because the chance of creating imbalance in the body is much higher. In fact, Ayurveda usually recommends a combining (samyog) of powerful herbs with other herbs to create a more balanced formulation.

In addition, whenever an active ingredient is isolated in the laboratory, harsh chemical solvents such as hexane and benzene are used. These solvents destroy the divine vibration found in the herb which, according to Ayurveda, is the most powerful aspect of its healing properties.

While the bitter taste and warming quality of aindri do stimulate the fire in the digestive system and liver, the main fire referred to here is in the brain.

Aindri is Good for the Heart

When the mind is strong, it does not easily come under the grip of the senses, which lead us on a roller coaster ride of emotions. In the presence of a balanced and clear mind, the heart also becomes balanced and blissful.

One interesting benefit of aindri is its ability to help the skin. It does this through several means. The bitter taste of aindri stimulates the liver. When the liver is strong, it keeps the blood free of toxins, and this improves complexion.

Finally, the most important way that aindri helps the skin is by strengthening the mind. There is a strong connection between skin problems and mental issues.

Whenever the connection between the mind and the light of the soul becomes weak the senses start to possess the mind. At the same time, contentment and tolerance begin to wane and the mind starts to find fault with everything. The combination of being unable to control the senses and being at war with the way things are brings on a desperate state of deep unhappiness--full of guilt, regret and fear. It is not the wild actions of the senses themselves that cause long term health problems, but it is the lack of peace of mind, combined with a high dose of guilt regarding those actions, which causes ill health.

Psychoneuroimmunology describes a cascade of chemical reactions, including the release of cortisol and other toxins into the bloodstrem when we think in a stressed manner. It is the toxic, chemical by-products of continous negative thought that ultimately affect the skin.

Most Ayurvedic remedies are taken in formulas made up for the individual. You can make an appointment with Vaidya Athena on the Healing page of this site to have an individualized remedy made up to improve the function of your mind.

CONCLUSIONS:This study provides further evidence that B. monnieri has potential for safely enhancing cognitive performance in the aging." http://www.ncbi.nlm.nih.gov/pubmed/18611150

"Although BM clinical research is in its infancy, at least six high-quality (by the Jadad Scale randomized, double-blind, placebo-controlled (RDBPC) human trials have been conducted. Pase et al. conducted a systematic review, finding some evidence that “Bacopa could potentially be clinically prescribed as a memory enhancer” even in non-demented subjects. BM administration significantly improved 9 out of 17 free recall memory tasks. One out of six of the studies' collective scores evidenced improved memory span; however, BM showed no improvement in memory involving the recall of short passages of text. The analysis of Pace et al. supports previous findings that BM most effectively reduces the rate of forgetting, but not acquisition or other aspects of cognition (though this matter is by no means settled).

In a meta-analysis, Neale et al. compared the nootropic effects of BM to Panax ginseng and modafinil (an eugeroic-wakefulness drug). Chronic BM produced the most consistent and largest effect sizes of the three. BM showed small- to medium-effect sizes for attention and information processing tasks. Larger-effect sizes were evident for auditory verbal learning tasks, sizes ranging from d=0.23 for delayed word pair memory tod=0.95 for delayed word recall (on the Auditory Verbal Learning Test) and d=1.01 for protection from proactive interference during delayed memory. These findings evidence the potency of BM, particularly in measures of verbal recall. Remarkably, contemporary findings appear to support the alleged use of BM in Vedic antiquity by scholars memorizing lengthy hymns." http://www.ncbi.nlm.nih.gov/pmc/articles/PMC3746283/