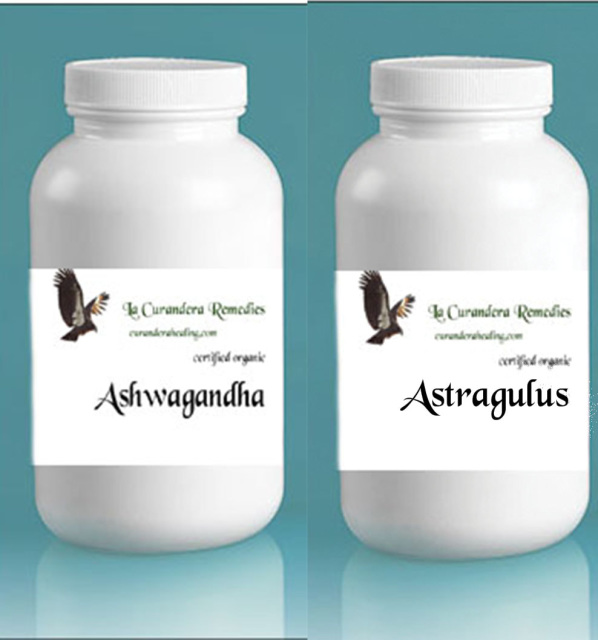 . Please DO NOT order this if you are not in the continental US, unless you contact us FIRST at info@curanderahealing.com, for shipping fees. Otherwise you will be charged for the paypal fee for refunding your money.

This is one part of the comprehensive, multi-therapy program of Ayurveda. You can make an appointment on this site at the page, Healing Work, to get the protocal right for you.

The past year has been banner year for Ashwagandha research. Numerous studies confirmed its healing properties in a variety of conditions, including stress, toxicity, heart disease, Alzheimer’s disease, diabetes, Parkinson’s, skin cancer, tuberculosis, liver toxicity and many others. Following is a summary of some of the findings of the over fifty different human, laboratory and animal studies conducted using Ashwaghanda published during 2012 and early 2013:

ASTRAGULUS ​(according to CANCERactive in the UK)

​Astragalus boosts the immune system and also  ´light ups´ the rogue cells so that the immune osystem can ´see them' better.  Possibly for this reason, MD Anderson concluded in research with patients on radiotherapy treatment, that it can double survival rates. It may also benefit liver function and  seems to reduce side effects of chemotherapy, reduces metastic spreak and increases survival time. It is estimated that 50 percent of the people who get chemotherapy will develop neutropenia. The neutrophils are your white blood cells. Astragulus may be the best way to increase white blood cell count.

Astragalus membranaceous has been used in Chinese medicine for two thousand years. It is known as ´haung qi´, or chi, because it boosts natural body energy levels. Astragalus is taken from the root of a perennial plant (Astragalus membranaceous) needing four to seven years to mature before the root is harvested in early spring. The root is not unlike a garlic bulb. Traditionally, this herb is known to boost the immune system and has benefits in cases of heart disease, high blood pressure, diabetes and respiratory infections. It is also used as a general tonic and to treat burns, abscesses and for hepatitis. It may depress the thyroid slightly so is not recommended for those with hypothyroid.

​​"The products and statements made about specific products on this web site have not been evaluated by the United States Food and Drug Administration (FDA) and are not intended to diagnose, treat, cure or prevent disease. All information provided on this web site or any information contained on or in any product label or packaging is for informational purposes only and is not intended as a substitute for advice from your physician or other health care professional. You should not use the information on this web site for diagnosis or treatment of any health problem. Always consult with a healthcare professional before starting any new vitamins, supplements, diet, or exercise program, before taking any medication, or if you have or suspect you might have a health problem. Any testimonials on this web site are based on individual results and do not constitute a guarantee that you will achieve the same results."