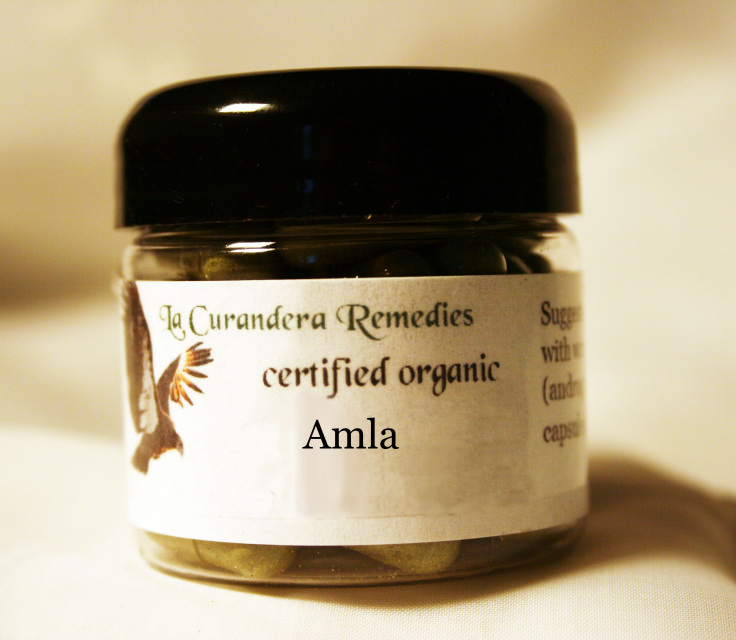 Please DO NOT order this if you are not in the continental US, unless you contact us FIRST at info@curanderahealing.com, for shipping fees. Otherwise you will be charged for the paypal fee for refunding your money.

Indian gooseberry, or amla, is a rich source of natural vitamin C, with a concentration of 600 mg to 1800 mg of asorbic acid in every 100 g. Fresh amla juice contains 20 times as much vitamin C as is present in orange juice. Some people like to put this powder in their smoothies. Keep in mind that it is a sour berry. Not too tasty for most.

Cancer Protection with Indian GooseberryOne of the most interesting and important areas of amla research is in the field of cancer prevention.

Alongside its powerful antioxidant effects, the Indian gooseberry has been reported to possess anti-inflammatory, antimutagenic, chemopreventive, antiproliferative and immunomodulatory properties that are beneficial in the prevention and treatment of cancer.

Studies have also shown that, along with being an exceptional free radical scavenger, amla extract can protect your DNA against damage from certain carcinogens and dangerous heavy metals.

While there are many compounds in Indian gooseberries likely to work synergistically against diseases like cancer, one called pyrogallol was shown specifically to have antiproliferative effects (prevents cancer cells spreading) on lung cancer cells in both in vitro and in vivo studies.

Other scientific research has also found pyrogallol effective against different types of cancer and suggested it be studied further with a view to using it as a cancer treatment (though whether this will be considered potentially profitable enough remains to be seen).

Type 2 diabetes is a rapidly growing health problem related to our increasingly poor modern diets. Blood glucose levels are particularly important for diabetics to keep under control. To this end pharmaceutical drugs are usually prescribed.

A recent scientific study compared the effects on fasting blood sugar of an amla supplement versus a leading diabetic drug designed to bring down blood sugar. In the study just 3 grams a day was shown to be even more beneficial and effective than the prescription drug at controlling fasting blood sugar levels.

It’s necessary to note at this point but I’m not advising anyone to go off drugs given to them by their doctor. Diabetes is a serious, often life-threatening disease and needs to be treated as such.

In fact, if amla’s effect on blood sugar is this powerful, taking it might be cautioned for diabetics also taking prescription drugs for blood glucose, in case it actually drops levels too far. It would be best to discuss taking it with your physician if you are currently being treated for diabetes.

There may well be a case to be made though for the benefits of daily Indian gooseberry powder supplementation to help prevent the damage that leads to the diabetic condition in the first place.

Type 2 diabetes is a disease that is increasing in our society at an alarming rate. Even children are now being diagnosed. Replacing processed, high sugar supermarket junk with natural superfoods would be a great start to avoiding this debilitating disease and this article has some other important tips.

Heart disease, still the biggest killer of Americans, is a disease of oxidation and inflammation. Given that, it’s not surprising that a powerful antioxidant and anti-inflammatory like amla would have a positive effect against it.

Research so far points to the health benefits of Indian gooseberry having multifaceted protective properties against developing cardiovascular problems later in life.

Doctors can give you drugs (with side effects) to lower your LDL cholesterol. But it’s not often that a substance will also raise your HDL cholesterol at the same time, without reported side effects. These valuable health benefits were observed with just 3 grams of Indian gooseberry powder a day.

Extracts from amla fruit have also been shown to inhibit lipid peroxidation, a significant factor in developing cardiovascular disease.

Other studies have demonstrated the effectiveness of Indian gooseberry at inhibiting the creation of advanced glycation end products that contribute to endothelial dysfunction and atherosclerosis.

Amalaki benefits also include preventing blood cells from sticking to endothelial linings and thickening blood vessel walls – usually the first step toward heart disease – as detailed in this scientific study.

Certain cells known as osteoclasts are involved in bone loss in osteoporosis and rheumatoid arthritis. Researchers found an amla extract was able to induce cell death in mature osteoclasts, thus potentially limiting the damage they can do to our bodies bones and joints.

Within the study they suggested Indian gooseberry as a potential alternative treatment for bone disease (Induction of apoptosis of human primary osteoclasts treated with extracts from the medicinal plant Emblica officinalis).

New strains of bacteria are becoming more and more resistant to antibiotics. However, certain superfoods like amla have natural antibacterial and antimicrobial effects that may help to counteract these pathogens in your body.

Specifically, tests have shown that the pulp of Indian gooseberries is effective against staphylococcus, cholerae and pseudomonas bacteria (Comparative antimicrobial activities of Amla…).

Amla health benefits also include preventing and even treating ulcers. An extract of Emblica Officinalis (Indian gooseberry) was shown to inhibit the growth of the Helicobacter pylori bacteria, responsible for painful gastric ulcers.

H. pylori is a particularly persistent gastric pathogen that can establish an infection in your stomach linings that may last for years, even decades. It has been estimated that around half of all people worldwide are infected with this organism.

While not everyone obviously developed ulcers from H. pylori, those that do have to live with recurrent and painful stomach inflammations that often don’t respond well to conventional treatments.