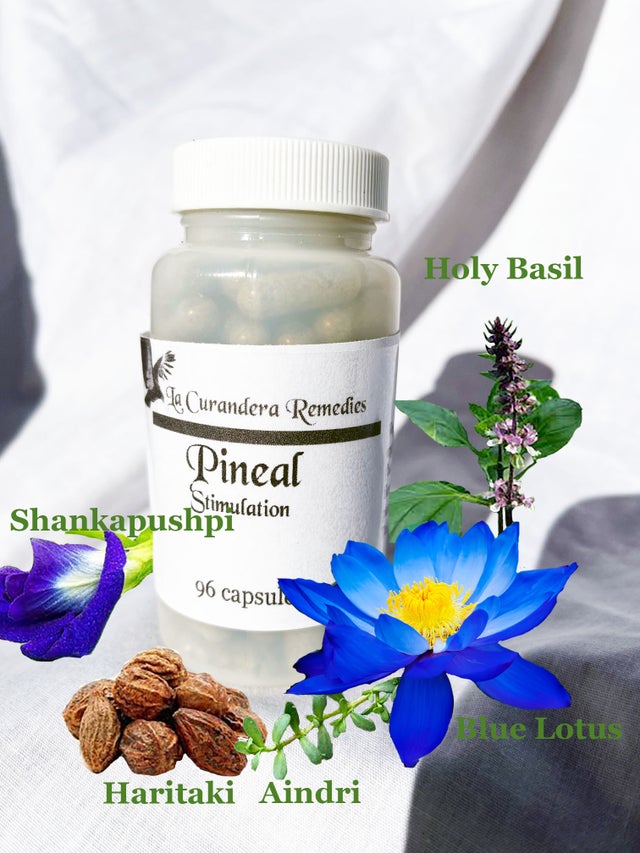 Please DO NOT order this if you are not in the continental US, unless you contact us FIRST at info@curanderahealing.com, for shipping fees. Otherwise you will be charged for the paypal fee for refunding your money. This formula is for educational and experimental purposes. Not for human consumption (according to the FDA).

Haritaki A myriad of toxins can lead to calcification of the pineal gland, however, one of the main causes of calcification is the build up of heavy-metal residues in the body. Mercury is a particular offender in the pineal gland calcification process. Results of scientific studies demonstrate that Haritaki can greatly assist de-calcification of the pineal gland by supporting the liver in its consistent efforts to remove mercury from the body. Haritaki is also highly “homeostatic” due to being adaptogenic in nature. Haritaki has many beneficial properties that aid brain health, sharpen the senses and increase cognitive functioning and emotional health. It is said that Haritaki consumption can assist multi-level homeostasis leading to an advanced internal state conducive to Third Eye Awakening.

Blue Lotus Flowers. The main effect reported is a pleasant feeling of warmth around the head and upper body; a very comfortable, dreamy feeling, with a slight stimulant effect. Many people relate to an expanded state of awareness with feelings of a psychic opening of the higher chakras, especially the 6th, or the third-eye.

The sacred flower seems to produce a subtle, high-level, expanded state of consciousness that may have been used in ceremonial meditation and magic. Energy workers have reported a heightened sense of psychic energy and the ability to better utilize these higher states in their practices. Many people also use the Sacrament to enhance meditation, utilizing the dreamy, trance-like effects to reinforce an alpha-state.

Aindri is most well known in India, where it has long been used in Ayurvedic medicine.

Recent studies have supported the use of bacopa to improve cognitive function naturally. In 2011, researchers from the Philadelphia College of Osteopathic Medicine found that regular use of bacopa extract has the potential to significantly improve the ability to recall learned information, even in elderly people with cognitive impairment and memory loss.

A 2005 study published in Phytomedicine confirmed that bacopa has antioxidant and cell-protective effects, while a 2013 study reported that the herb increases cerebral blood flow. In fact, there are over 92 unique studies examining the beneficial effects of bacopa. It can even increase the growth of nerve cells called dendrites in the brain, to promote more efficient communication in the nervous system.

This effect is achieved through an active compound called bacoside A, and the stimulation of an enzyme called tryptophan hydroxylase. Together the effect is more rapid processing and exchange within the brain, producing clearer thoughts and memories that come forth more easily.

Other noted therapeutic benefits include rapid relief of anxiety and stress. The cognitive effects tend to take effect over a longer period; studies show that bacopa should be used for eight to 12 weeks before results are evaluated. Side effects are few, especially when the supplement is taken with food to prevent digestive upset.

Tulsi (Holy Basil) Research scientists at Rajasthan University have discovered that Tulsi can replace some of the more expensive alternatives to fluoride removal.

The researchers conducted the experiment in a village of Narketpally Mandal by soaking 75 mg of Holy Basil leaves in 100ml of water that had over 7 parts per million of fluoride. After soaking the leaves in the water for a mere 8 hours, the fluoride was reduced to just 1.1 parts per million. The World Health Organization says that ‘safe’ levels of fluoride in water are no higher than 1 part per million.

With the recent admittance by Harvard University that fluoride was bad for health, and the continuing news that points to fluoride being responsible for depleting brain capacity to causing ADD and ADHD, or even calcifying the pineal gland, (which inhibits important hormonal secretions like Melatonin and Seratonin, and DMT).

Celastrus paniculatus is an herb used in Ayurvedic medicine with nootropic and neuroprotective effects. It contains several bioactive compounds including sesquiterpenes such as celastrine, celapanine, celapanigine, celapagin, malkangunin and paniculatine. Celastrus paniculatus has been shown to enhance cognitive function by improving memory and learning, and to protect the brain from oxidative damage and neurotoxicity. Anxiolytic, antidepressant, analgesic and anti-inflammatory effects have also been described.

This article details other therapies for the pineal as well as three of the ingredients: blue lotus, Holy basil and celastrus paniculata. https://healersofthelight.com/activating-psychoactive-elements-brain-without-use-drugs/

"The products and statements made about specific products on this web site have not been evaluated by the United States Food and Drug Administration (FDA) and are not intended to diagnose, treat, cure or prevent disease. All information provided on this web site or any information contained on or in any product label or packaging is for informational purposes only and is not intended as a substitute for advice from your physician or other health care professional. You should not use the information on this web site for diagnosis or treatment of any health problem. Always consult with a healthcare professional before starting any new vitamins, supplements, diet, or exercise program, before taking any medication, or if you have or suspect you might have a health problem. Any testimonials on this web site are based on individual results and do not constitute a guarantee that you will achieve the same results."