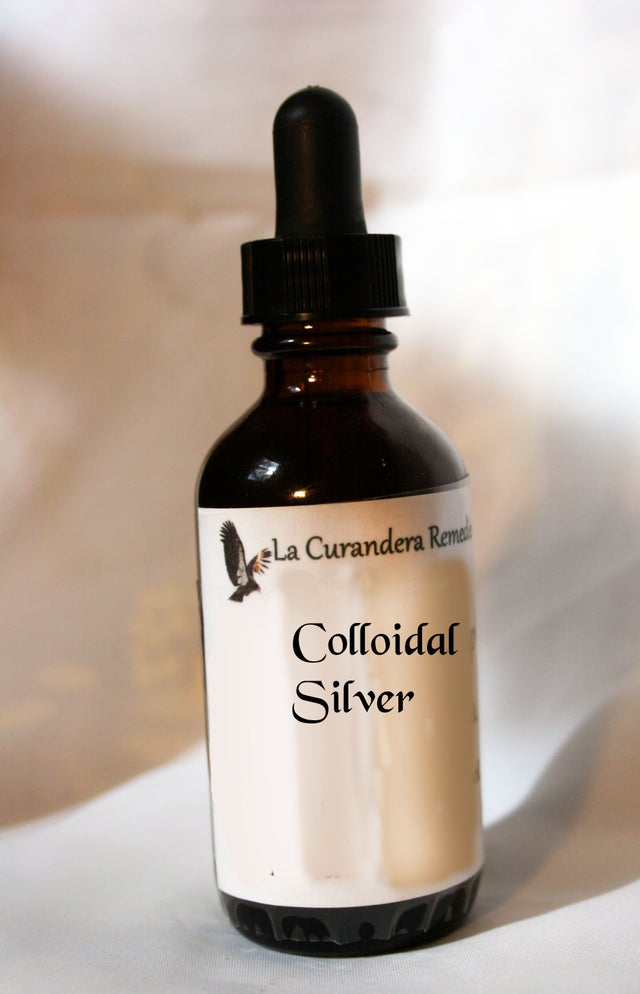 Free shipping in the continental US. We are not shipping out of the country at this time.

Two ounces of colloidal silver in a dropper bottle. Doseage is 2 dropperfuls, one or three times a day according to need. Do not take more than two weeks at a time.

Silver has been used in Ayurveda to eliminate bacteria for thousands of years. It should never be used as a preventive! On average about on adult has 30 trillion human cells and 39 trillion bacteria. Humans cannot survive without bacteria. Silver should be used only for an overgrowth of harmful bacteria. The recommended dose is ten days. The number of times it is taken during the day depends on the type of infection. For an infection of the heart, it should be taken 3 times a day.

Some traditional uses: food poisoning due to bacteria; topical antiseptic; keeping burns from being infected; e-coli infection; MRSA; and other bacteria. Helpful for many types of endocarditis instead of antibiotics, and many bacterial infections.

Silver has historically and extensively been used as a broad spectrum antimicrobial agent. It has a long and intriguing history as an antibiotic in human health care, and also as an antimicrobial in folk medicine. It was believed that people who ate from silver dishes and cutlery were less likely to get sick. It was believed to protect the rich from Plaque in the middle ages.

Silver leaf was used to combat infections in wounds sustained by troops during World War I. Silver has also been used for water purification, treating wounds, injuries, reconstructive orthopaedic surgery, cardiac devices, catheters and surgical appliances. In the early 1800s, doctors used silver sutures in surgical wounds very successfully and that was a time when western scientists rediscovered what was known for thousands of years that silver is a powerful germ fighter. Silver began to lose favour with the advent of antibiotics in around the 1930s. With the rise of antibiotic resistance, silver is making a comeback as a useful broad-spectrum antimicrobial alternative.

This study attempted to show how silver works on the DNA of bacteria. "researchers observed that silver ions were causing paired strands of DNA in the bacteria to separate, and the binding between the protein and the DNA to weaken. "Then the faster dynamics of the proteins caused by silver can be understood," said Wang. "When the protein is bound to the DNA, it moves slowly together with the DNA, which is a huge molecule in the bacteria. In contrast, when treated with silver, the proteins fall off from the DNA, moving by themselves and thus faster." https://www.sciencedaily.com/releases/2020/04/200409140021.htm

"Abstract: Silver is a potent antimicrobial agent against a variety of microorganisms and once the element has entered the bacterial cell, it accumulates as silver nanoparticles with large surface area causing cell death. At the same time, the bacterial cell becomes a reservoir for silver. This study aims to test the microcidal effect of silver-killed E. coli O104: H4 and its supernatant against fresh viable cells of the same bacterium and some other species, including E. coli O157: H7, Multidrug Resistant (MDR) Pseudomonas aeruginosa and Methicillin Resistant Staphylococcus aureus (MRSA). Silver-killed bacteria were examined by Transmission Electron Microscopy (TEM). Agar well diffusion assay was used to test the antimicrobial efficacy and durability of both pellet suspension and supernatant of silver-killed E. coli O104:H4 against other bacteria. Both silver-killed bacteria and supernatant showed prolonged antimicrobial activity against the tested strains that extended to 40 days. The presence of adsorbed silver nanoparticles on the bacterial cell and inside the cells was verified by TEM. Silver-killed bacteria serve as an efficient sustained release reservoir for exporting the lethal silver cations. This promotes its use as a powerful disinfectant for polluted water and as an effective antibacterial which can be included in wound and burn dressings to overcome the problem of wound contamination." antibiotics-09-00181.pdf

Recently discovered in the West by allopathy and then naturopathy, many are claiming that it will kill virus as well. This page shows warnings given by the FDA to companies making those claims. https://www.jdsupra.com/legalnews/how-fda-is-monitoring-the-covid-19-44829/

Western research showing the efficacy of this Ayurvedic remedy. https://www.ncbi.nlm.nih.gov/pmc/articles/PMC3131772/