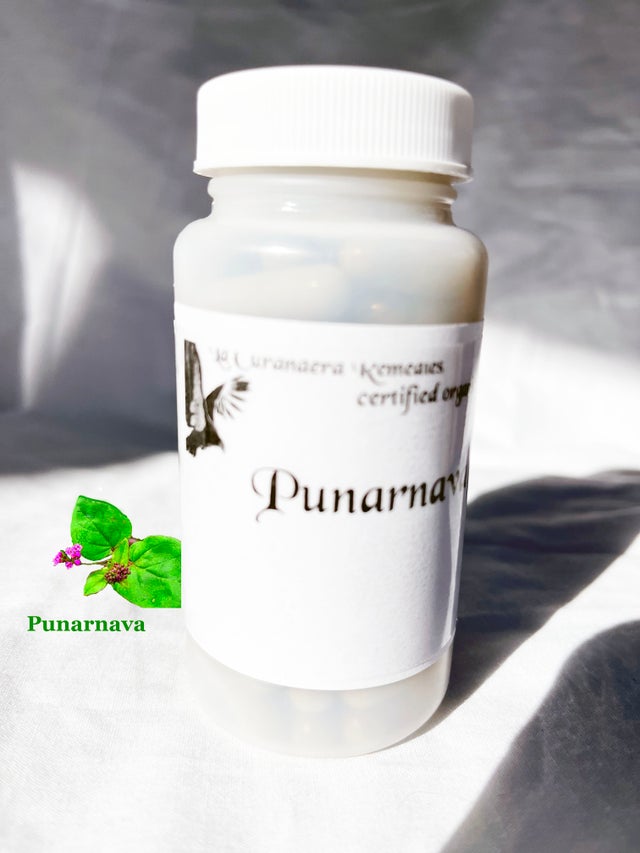 This is one of the best herbs for balancing and rejuvenating kapha and is an ingredient in most traditional kapha-reducing formulas. Punarnava is used to support proper function of the heart, liver, and kidneys and to promote comfortable movement of the joints for those with kapha constitutions and imbalances. It promotes healthy weight management especially when one is prone toward easily gaining weight rather than losing it. Punarnava also supports the healthy elimination of urine and comfortable fluid levels in the tissues

This study was conducted in 50 clinically diagnosed patients of geriatric anemia. Patients were treated with Punarnava Mandura 2 tabletsIn assessment of digestive fire, 100% improvement was noted in capacity to digest food, capacity to intake food and appetite during meal hours, which may be due to appetizer, digestive and carminative properties of the herb. While 88.10% improvement was noted in habit of routine urges especially bowel

In assessment of Sattwa Bala, statistically highly significant improvement was found in feeling of wellbeing after awakening, pathological dreams and psychological status of patient and proper sleep at time in 89.19%, 82.89%, 69.23%, 91.07% respectively. While assessing Deha Bala, physical strength, revitalization of speech and luster and growth of body assessed by weight were improved in 87.37%, 74.16% and 0.23% of the patients respectively" ​

"Punarnava is a folk medicine and super-food as well as a classical Ayurvedic Rasayana. In India, it is used by traditional tribal healers in Chhattisgarh, Bagbahera and Pithora regions. Healers apply Punarnava to the vagina to hasten delivery and also tie the roots, wrapped in red cord, around the woman’s waist.

They also apply Punarnava mixed in whey to breast abscesses. For eye sties they use Punarnava mixed in ghee, and for conjunctivitis, Punarnava in honey. They make Punarnava oil with Nirgundi to ease arthritic aches and pains. The Bhil tribal folk use Punarnava roots for blood dysentery. Country folk plant Punarnava in their gardens to repel poisonous snakes and scorpions and in West Bengal and Assam, Punarnava leaves are eaten as a potherb and are understood to prevent renal calculi. In other areas, the entire plant, including the root, is eaten in curries and soups, while the seeds and roots are used in cereals and pancakes. In South America, Erva tostão or Punarnava has long been used by traditional healers for maladies of the liver and kidneys.

In Ayurveda, Punarnava acts on the rasa, rakta and mamsa dhatus.It is used as a rasayana for lungs, heart, and kidneys as well as a diuretic, expectorant, and anti-diabetic. It reduces lung and peripheral oedema, is anti-rheumatic in painful and swollen joints, improves renal function, breaks up renal calculi, and is valuable in nephrotic syndrome. As a bronchodilator and expectorant it is used in congestive cardiac failure, chronic bronchitis, bronchectasis and plural effusion. As an eye medicine, it is used in glaucoma and night blindness. " by Alakananda Devi